x
Sign up for our newsletter and receive the latest posts
Thanks! You have been subscribed to our newsletter
Portada » SLIPER: Putzmeister’s concrete rheometer or the science behind the world’s tallest building

Concrete pumping has overcome huge technical challenges over the past recent years, not least breaking the world record in height pumping during the construction of the world’s tallest building in Dubai, the Burj Khalifa.

While there is a wealth of new research and developments in concrete mix design and materials, such as high performance concrete or glow-in-the-dark concrete; testing methods have lagged behind in terms of technical ingenuity.

As we have discussed previously, concrete consistency and workability have been assessed for many years with relatively simple, rudimentary tests that can be done/implemented on site with precious little equipment, such as the flow table test.

Testing concrete’s viscosity, for instance, is key when you are trying to propel it over 600 meters up in the sky, like with the Burj skyscraper. Up until that point, the way most engineers would have faced this challenge was by laying down 600 meters-worth of pipeline in the desert to quite literally provide an accurate reading of the material’s viscosity.

Viscosity, or how easily the concrete can be pumped, will determine the pumping pressure required to bridge the distance.  Putzmeister’s Dr. Knut Kasten is one of the engineers to come up with an efficient testing solution to this problem: the SLIPER rheometer, which helps you measure the way concrete will flow in specific circumstances. The principle behind it is that when the friction factor is optimized and the viscosity of the concrete is known, the pumping pressure can be calculated to choose the correct equipment. 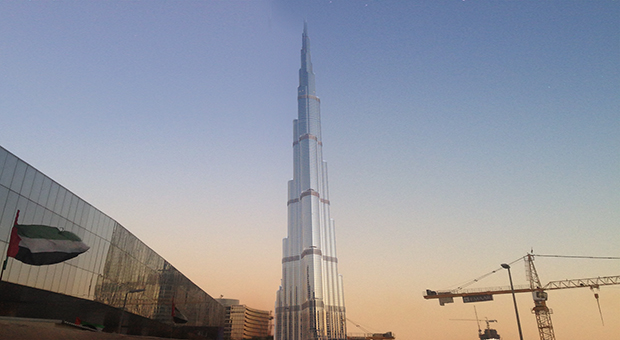 We catch up with him to discuss the circumstances leading to its design, and how the SLIPER is being used.

“The SLIPER is devised to be used in lab and onsite, but its main advantage is that it acts as a small lab in itself, meaning you only have to produce small amounts of concrete, i.e. only need small mixer, and a bucket full of concrete to make tests. You can compare and optimize concrete mix designs with the SLIPER in a few hours. In the past, you had to use the concrete pump to physically test your mix under similar circumstances, then go back and modify the concrete mix”.

A rheometer like the SLIPER is particularly useful for large-scale projects where large amounts of concrete are required. No wonder that the initial concept behind the SLIPER was in fact born during the construction of the Burj.

Technological challenges and the development of innovation

“In 2005 they started the foundation of the building, and they wanted to test the pumpability before the high rise construction began. So they built a 600 m horizontal pipeline, and laid it in the desert, they had five mix designs and were looking to get one numerical value for each mix design. The effort for the horizontal pumping test was really massive as they required more than 5m³ for each test with pumping etc, and a lot of people had to be standing around to be part of the tests… the SLIPER can do this in minutes with a bucket full of concrete.”

Working in desert conditions posed its own set of problems, Kasten says: nobody had ever pumped that far up in height in such extreme heat, and the concrete mix required a constant supply of ice to cool down the mix in the arid weather.

“We had to keep an eye on the pump all the time during the building construction. We had more than 200 bar concrete pressure in a pipeline of 600-700 ms at the end, so we took measurements very often to make sure the pumps were running without problems” 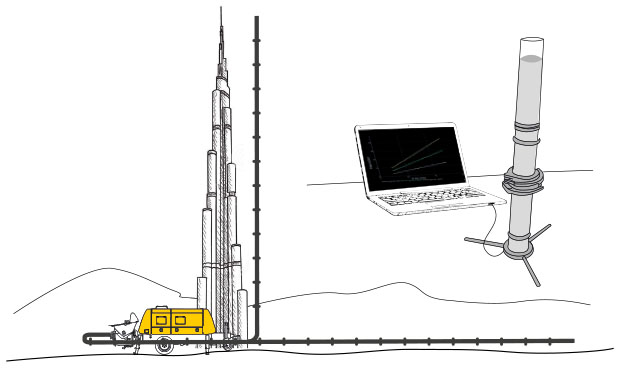 As can be expected of such an emblematic building, the construction site was a 24-hour working operation with thousands of workers onsite each day. Then there were very high temperatures in Dubai: during daytime the crew did the steelwork reinforcements for concrete, while the pumping was done during the slightly cooler temperatures at night.

The lessons learnt during construction led to the design of the Sliding Pipe Rheometer [SLIPER] in 2010, which was offered by Putzmeister as a service for its clients. The device was brought to market this year alongside German testing equipment manufacturer Schleibinger.

While there are other rheometers in the market, the SLIPER’s USPs include the fact that it can simulate the actual pipe flow by moving the pipe relative to a piston, and its ability to handle high viscosity concrete.

Many other rheometers are designed with rotating blades in a container, and their torques are insufficiently strong to withstand very sticky concrete. The SLIPER can handle very sticky concrete (high viscosity) which is more often found in the market and is made to predict the pressure in the concrete pipeline.

Kasten sees those existing rheometers fulfilling an important role as simpler onsite testing tools, but sees the SLIPER as the indisputable market leader for defining pumpability especially for larger projects requiring many different types of concrete, or for companies researching special applications.

Not very long ago, skyscraper construction would have involved buckets of concrete being hoisted up in the air and transported to the site. Today, state-of-the-art pumping technology takes care of that for us. Being able to determine the pumpability of concrete through super-accurate technology will only make the process faster and better.