x
Sign up for our newsletter and receive the latest posts
Thanks! You have been subscribed to our newsletter
Portada » The New Austrian Tunneling Method (NATM) & shotcrete: growing side by side

Known as NATM, this system of tunnel engineering is more a set of principles or a philosophy than a prescriptive, technical method.

NATM seeks to maximize the terrain´s inherent resistance and support capacity, and is widely recognized as one of the most economical techniques for building and evaluating tunnels.

As well as providing significant savings in support material costs, personnel and a reduction in project timelines; the method exhibits great resistance to the geological pressures seen in an earthquake-prone area. In fact, it is the construction method chosen par excellence to build a huge number of tunnels worldwide.

Unlike the classical methods such as the Belgian or German approaches, where the tunnel is immediately supported without allowing it to deform naturally, NATM allows the deformation of the rock mass before stabilizing the tunnel, which reduces the amount of additional support materials required. 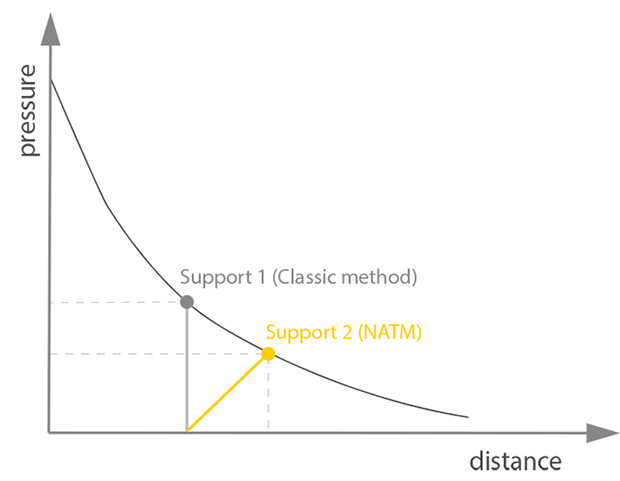 Deformation curve of the rock mass

The resulting tunnel is covered with a layer of sprayed concrete or shotcrete, which is faster and easier to execute than traditional formwork. The shotcrete layer increases the internal cohesion of the rock mass, reinforcing the support ring, and can act as a temporary as well as final lining, depending on the site’s requirements.

This sequential method caused widespread astonishment among engineers and constructors at the outset, but the conscientious work in Austria during the 1960s ended up consolidating this approach as a gold standard in the industry.

The work explored in particular the cost savings and the increased security that NATM brings during construction. Predicated upon the observational method, it works by mixing construction with settling-in periods during which the rock mass is observed, to adapt the tunnel support design to the geological requirements.

In the world of tunneling, this method is widely seen as a series of principles that allow for a more dynamic assessment of the terrain. But the consensus only goes that far.

While some experts believe that there is nothing “New” in NATM, others think this method is not exclusively Austrian, while others prefer to use names such as “Sequential Excavation Method” or “Shotcrete Method”.

As an example, the NATM method has slowly changed in London to become Sprayed Concrete Lining (SCL), a layer of shotcrete that can be used as a final lining, and which is better suited to the city’s clay soil.

These changes came mainly on the back of the partial collapse of the Heathrow Express Rail Link Project in October 1994, and which highlighted the shortcomings of NATM in soft terrain, where deformation can quickly degenerate.

A similar adaptation process of the NATM is likely to be seen in a host of other projects worldwide, where the principles will have to be tailored to each projects’ specific needs.

Despite the lack of consensus about the specific definition, NAT is likely to remain an industry go-to for tunneling and support.

What do you think is the most appropriate name for this method? Let us know in the comment section below.

Although NATM refuses to be defined as a specific technique, there are some common underlying principles:

If you would like to find out more about what is the most suitable shotcrete equipment for your project, you can find out more here