x
Sign up for our newsletter and receive the latest posts
Thanks! You have been subscribed to our newsletter
Portada » The role of shotcrete in the Drill & Blast Cycle

Within the drill and blast cycle for underground tunnel construction or mining, shotcrete has become increasingly prominent over recent years.

The technique consists of the drilling of boreholes in the rock, the placing of explosives and blasting to properly fragment the work section.

An alternative excavation method is via Tunnel Boring Machines (TBM). Widely used in civil engineering, TBMs are becoming increasingly ubiquitous in mining, even though their use will be determined by the stability of the strata, the length of the tunnel, as well as its financial viability.

After blasting, sprayed concrete or shotcrete can often entirely replace the costlier and more work-intensive use of steel mesh reinforcement.

Initially used as temporary support, shotcrete is now often used as a final support mechanism in some sites. The advent of fiber-reinforced shotcrete has also caused a surge in interest, on the back of its greater ductility and energy-absorption capacity.

Here is a step-by-step breakdown of the drill and blasting cycle:

Jumbo machines are used to drill the holes where the explosives will be charged subsequently.
The quality of the rock and the characteristics of the site’s strata will determine the number of boreholes required as well as the footprint of the blast area.

The boreholes are charged  with cartridge or bulk explosives, although the latter is considered to be more efficient as it makes the most effective use of the energy from the blast.

The most widely used compounds are dynamites, hydro-gels, emulsions and ANFO (Ammonium Nitrate Fuel Oil), and they are pumped into the holes with a hose pusher. Charging equipment is normally mechanized for greater security, and ensures the explosive is safely charged into the borehole through the use of measuring cells that can accurately read filling levels.

The blasting is typically triggered sequentially in order to ensure the optimal fragmentation of the rock, as well as to ensure the resulting vibrations do not compromise the integrity of the surrounding structures. 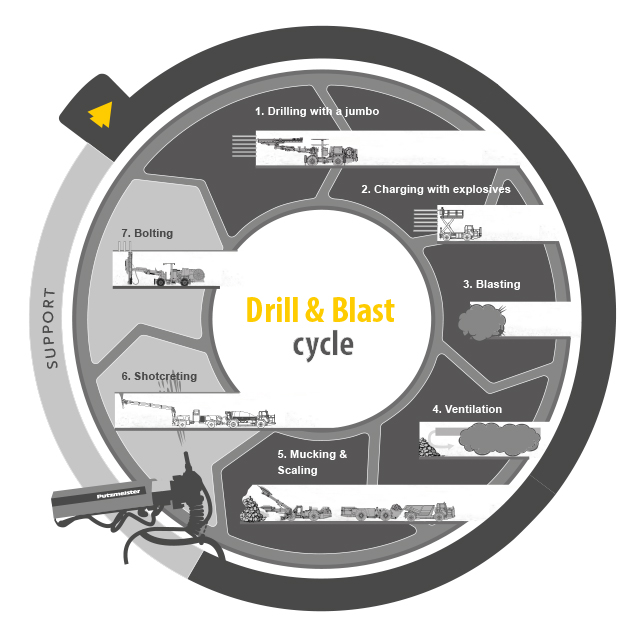 These explotions create toxic gases, which make ventilation a vital step. Adequate ventilation can be achieved with pressurized jets of air.

It consists of three steps: loading and hauling the muck, and final transport out of the worksite. Shovels and dump trucks specifically designed to operate underground are used to carry out this work, alongside scaling machines that remove any loosened rock.

Depending on the site’s characteristics, the tunel support can be either light or heavy-duty, and combines shotcrete alongside bolts and steel mesh.

A lighter support structure may feature thinner shotcrete layers (between 5-10 cm), and a more sparse use of bolts; while heavy-duty support could see thicker shotcrete layers (30-40 cm), a greater number of bolts, as well as the use of metal trusses.

Wet-mix shotcrete is the current gold standard due to its easier, more homogeneous application; the time and cost savings as well as the safer working conditions it creates. It is applied with mechanized shotcrete equipment specifically designed for underground work, which work seamlessly with underground batching plants and mixers.

The use of bolts and metal sheets will normally be dictated by the geo-mechanic behaviour of the site. Often, these can be used alongside shotcrete for greater protection against corrosion.

If you would like to find out more about the advantages of shotcrete and its use in underground mines and tunnels, you can read more here.