x
Sign up for our newsletter and receive the latest posts
Thanks! You have been subscribed to our newsletter
Portada » How is shotcrete used in slope stabilization work?

One of the many applications of shotcrete in civil engineering work is that of slope support, a cut in the terrain which is at a steep angle to the horizontal.

Slopes, which are often created during the construction of highways, dams or railway lines, are generally designed so that the rock mass can support itself; but they may sometimes require additional support to avoid slipping and failure.

Ahead of any slope stabilization work, it’s crucially important to define the main characteristics of the terrain, such as height and gradient, composition and stability, as well as the climate where it’s located.

One of the key elements to consider is the angle of repose, or the angle at which the terrain is stable or able to support itself, and which is largely determined by the size, shape and composition of the soil´s particles.

Shotcrete figures prominently among several methods for slope stabilization due to its versatility, durability, early resistance and its capacity to adhere to/ adherence to the subtract.

Because shotcrete is applied pneumatically, the material is compacted against the surface to fill cracks and fissures and prevent loose material from falling. Shotcrete can therefore act both as a protective coating over the slope’s surface, but also as an ‘anchoring surface’ onto which bolts and other support systems can be fastened.

It’s important to note that very steep slopes in terrains with poor rock mass quality entail a greater risk of slope failure, and therefore a superficial layer of shotcrete will not suffice. This type of slope will require extra stabilization such as wire, mesh and fibres.

Concrete spraying is typically carried out from the base of the slope upwards, much like in tunneling and mining, in order to prevent the creation of pockets of material and reduce the rebound rate during application.

Mechanized shotcrete equipment feature concrete spraying arms with a wide reach that help ensure a safer and more efficient application. The spraying units can sometimes be mounted onto trucks, allowing them greater mobility.

In failed slopes, this kind of equipment allows operators to apply shotcrete from a safe distance, and guaranteeing a quick intervention to prevent further fallout. 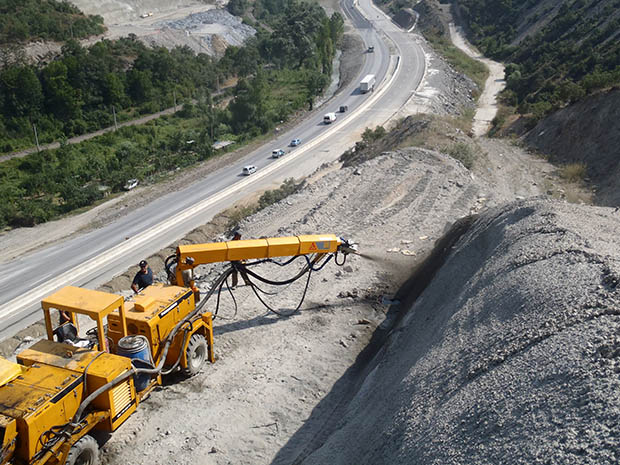 Fiber-reinforced shotcrete can in some instances replace steel mesh. Comparatively, FRS can better adhere to irregular surface of a slope, and it can be easily applied with a smaller headcount.

Other stabilization methods include geo-textile (such as coconut fiber blankets), the use of plants, triple-torsion mesh, gabions, concrete buttresses or pre-fabricated concrete elements.

Taking into account that rain and water-related erosion is related to a higher risk of slope failure, it’s essential to install a drainage system in areas with heavy precipitations to allow water to permeate.

Have you ever worked in slope stabilization with mechanized shotcrete equipment? Share your anecdotes in the comments section.