x
Sign up for our newsletter and receive the latest posts
Thanks! You have been subscribed to our newsletter
Portada » Do you call it shotcrete, sprayed concrete, or gunite?

At Putzmeister Underground Technology, we are working in a multicultural and multilingual environment: Located in Madrid, Spain, and forming part of the Putzmeister group headquartered near Stuttgart, Germany, we are marketing and servicing concrete spraying and transport equipment all over the world.

The process of spraying concrete onto a surface at high velocity is globally referred to as “shotcreting”. However, the related terminology is more heterogeneous than you might think, which has led us to do a little marketing-related research on the topic: Shotcrete, shotcreting, sprayed concrete, concrete spraying, gunite, gunning… Is it all the same?

According to the American Shotcrete Association (ASA), the generic term “shotcrete” covers both “sprayed concrete” (max. aggregate size of 12-16 mm) and “sprayed mortar” (6 mm), whereas “gunite” consists of sand and cement only.

The term “gunite” was used before the introduction of the term “shotcrete” and referred to dry-mix spraying, invented in 1907 by the American Carl Akeley and trademarked in 1911 by the Cement Gun Co. The spraying gun, also invented by Akeley, is the eponym of “gunite”. This is also the reason for the use of the verb “gunning” to refer to the spraying process.

In 1920, this innovative process first spread to Europe, India and South Africa before finding its way to the American west coast and South America, despite the geographical proximity. This may be the explanation for the term “gunite” (Spanish: “gunita”), stemming from this earlier period, still being used a lot in Spain, whereas South American countries prefer the term “sprayed concrete” (Spanish: “hormigón/concreto proyectado/lanzado”), as well as “shotcrete” stemming from a later period of development.

The addition of “shotcrete” to concrete spraying terminology can be traced back to new developments in the industry, especially the change from the dry-mix process to the wet-mix process in the 1970s. The term was first used in 1950 by the American Railway Engineering Association. In order to end confusion, the American Concrete Institute defined “shotcrete” as “pneumatically applied concrete or mortars”, including wet and dry mix. The term “gunite” however, only refers to the dry-mix method.

Gunite remained a proprietary trademark until 1971 and is still used as a generic term especially in North America, where the whole process started. Nowadays, “shotcrete” is a widely accepted term, with the equivalents “sprayed concrete” or “sprayed mortar”. 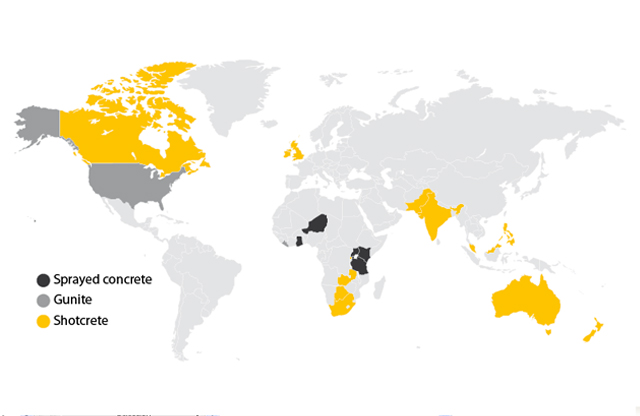 How do you usually call it? Participate in our 1-minute-survey and receive the results by email!